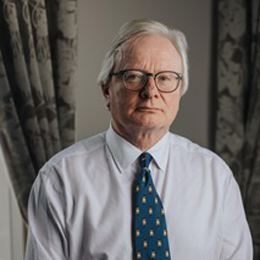 In 2018, Alan Mahon retired from the Superior Courts to take up the position of Ombudsman for Ireland's Defence Forces, a position that he currently holds. Prior to retirement, he had 12 years' experience as a Judge of the Circuit Court, 4 years' experience as a Judge of the Court of Appeal and before that, 25 years as a barrister, including 13 years as senior counsel. Both as an advocate and as a judge, he was widely experienced in all types of civil litigation including commercial, property, contract, landlord-tenant, probate, planning and arbitration. As an appellate judge in particular, he has dealt with a wide variety of litigation including numerous complex civil and commercial appeals.

Widely recognised for his forensic skill and legal acumen, in 1990 Alan authored an original and authoritative book on Estate Agency Law in Ireland and from 2003 to 2012, he was Chairperson of the Planning and Payment Tribunal of Inquiry. He obtained his first accreditation in mediation in 2017 through the Law Society of Ireland. In 2019, he successfully completed the course of study and assessment for certification as a member of the Mediation Institute of Ireland (MMI) and is now a member of the Institute.

Elected member of the Executive of the Association of Judges in Ireland: (representing the Court of Appeal 2014-2018 and representing retired Judges 2019 to date).

Alan is married with a grown-up family and resides near Dublin. He is an experienced navigator in Ireland's many waterways and when he isn't sailing his boat, is busy with a variety of domestic DIY projects where his enthusiasm occasionally overtakes his skill.