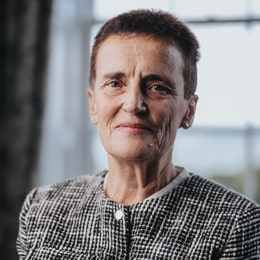 Rosemary has over 35 years’ experience as a solicitor and is ranked as a leading lawyer by authoritative publications such as Legal 500 and Chambers UK. She is admitted to the Roll of Solicitors in Northern Ireland, The Republic of Ireland, and England and Wales and has extensive experience advising and representing both employees and employers before Employment Tribunals and in the higher Courts of these jurisdictions.

Rosemary’s skill as a mediator arises not only from negotiating settlements in a wide range of civil litigation matters, but also from her experience in promoting equality, fairness, and good community relations and in adjudicating important issues of professional conduct involving lawyers. Clients and lawyers respect her record of integrity, independence, and expert handling of sensitive issues.

Rosemary is married, has three adult children and her interests outside the law include hill walking, reading and keeping abreast of current affairs.